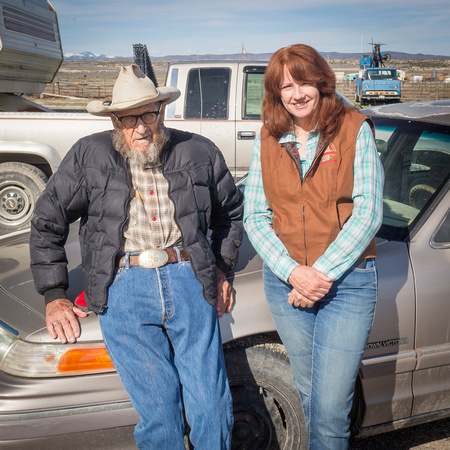 Jed and CarlaJed and I visiting. He shared about his life as a Cowboy, Riding for the Pony Express Re-Ride, and Pony Express History around Ibapah, Utah.

Jed and I met in Ibapah, Utah

Below is information that has been extracted from my FIRST DRAFT of my Pony Express Adventure Journal 2016.

I am so excited to share Jed with you, I just couldn’t wait any longer!

Please forgive me of any errors that there may be in spelling or grammar… Thank you!

Jed, a 97 year old gentleman and local historian, pulled up in his grey sedan. Though he had a walker, he asked for no help, and got out to stand up to speak with us. After niceties, he began to share his knowledge and memories of his youth.  Jed shared that he has cowboy’d all over the west, from Nevada to Montana. He expressed how he has broken many a bone, from horse wrecks, including his hip, where he had a horse roll over on him. He has survived all his siblings, and told us he never smoked a day in his life. Him and Bruce exchanged about places they had cowboy’d the same. Also, Jed included to tell us that just 3 years ago he rode in the XP’s annual re-ride; Eureka, NV to Deep Creek, UT! At age 94!?!

Jed’s family roots are from Scotland. They traveled out with Brigham Young to the Salt Lake City area in Utah. His Grandmother Elizabeth walked alongside Jed’s Great Grandmother who was also pregnant at the time… all the way from St. Louis, she had said that it was better to walk than ride the oxen pulled wagon, as it was too bumpy a ride. Once she arrived in Salt Lake City, she delivered twins! Jed stated, they were also some how related to the famous Marshal, and once body guard of Brigham Young, Porter Rockwell.

Jed (Gerald) Cook, born on September 16, 1918 in Lehi, Utah. I laugh as I type this, but hey, it is what HE said, so I am sharing it… He said, “After my first bowel movement they moved to where the Parker Ranch is now.” (That is where we went back to purchase fuel from, since there is no longer any gas stations in Ibapah.)

Jed was married for 44 years to his wife Joyce. They had 2 girls and 2 boys

Update;  Jed called me a few months back to see how the book was coming… I was sure hoping to give him a copy… but the time it is taking for research and finding sites, it is still in the preliminary phase, and sadly he has passed away recently. His daughter Marilyn Linares, has written a wonderful book from his life’s stories titled; “Jed”, available on Amazon.